Sister Cecilia is with God

We celebrated the Funeral Mass honoring  Sister Cecilia on February 1.  The Sisters waited for Fr. Mike Joncas to return to the Cities so that he might preside at the Eucharist. Fr. Mike and Sr. Cecilia had a long telephone relationship. Sr. Cecilia was the “fisher of priests” for our daily Eucharist in Bloomington.

And so for our Sister the liturgy began with a Procession into Chapel at Assisi Heights:
At the piano: Lynn Karnati, “How Lovely is Your Dwelling Place,”
Cross Bearer: Christine Holm
First Reader: Tim Murphy, carrying the Lectionary
Second Reader: Mary Kandels

And began the ritual.
Sr. Margaret sprinkled the cassette with Holy Water;
Srs. Caroline and Helen place the pall on the coffin.
Sr. Gabriel placed the Form of Life and the Crucifix on the coffin.

At the conclusion of this beautiful service for our Sister Cecilia we all sang:
“The Blessing of St. Clare.”

The evening before the Funeral Mass at the Vesper service for Sister Cecilia we read  from Sister Cecilia’s personal reflections that she had left for us which we call, The Gospel according to Cecilia.

“Following six years of Poor Clare community life at Sauk Rapids and nine months receiving temporary hospitality from the St. Joseph Sisters at Holy Angels
Secondary School, Richfield, Minnesota, I was very excited to settle in Bloomington, to make Jesus’ presence known through our prayer, daily Eucharist, the Divine Office and contemplative community. Later I found an additional
way to make Jesus’ presence known through a telephone ministry, receiving incoming calls for prayer and offering to each caller a listening ear.” Sister Cecilia

“My father died suddenly on April 29, 1949, the final day of an 8-day retreat before my first vows. That evening I had a dream about my father. I saw him lying on a cross. There was a sense of God’s great mercy surrounding him.  When I was awakened by the Abbess and Vicaress to inform me that my father had died I was not surprised.”

Blessings to all,  Sister Cecilia

Who is more delighted, the cats or Sally?

Too bad that Kitty had to leave!

Here we all are in our construction finery!  Mr. Don DeCramer, project director  of the renovation of our community home on third floor, invited us to go down to Assisi Heights to see the progress of the reconstruction of our wing.  The stipulation of the invitation was that we must wear hard hats, vests and sensible shoes.  Kathy Gatliff, director of Communications & Public Relations at Assisi Heights,  took these great photos. 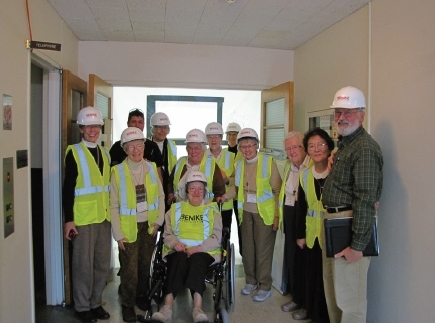 Sisters and Don at the Entrance to our wing. 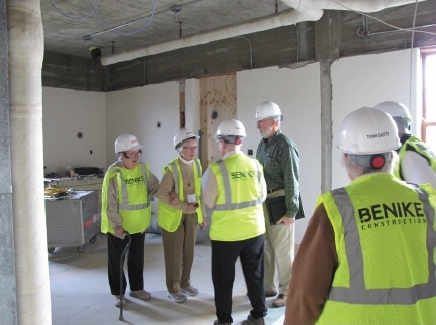 Sisters thank Don and his crew for their excellent work. 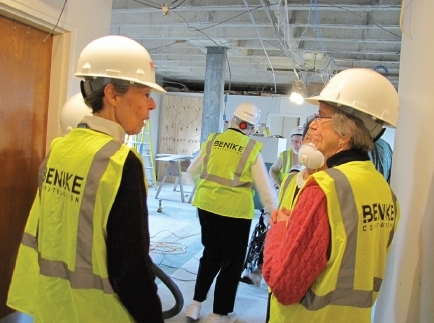 Srs.Marilyn and Beth in deep discussion. 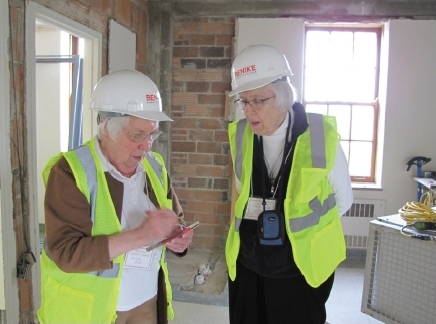 About 15 years ago the Association of Contemplative Sisters, Midwest Cluster, began meeting here at the Monastery.  Sisters Helen and Jo are pictured with members of the group who meet here each month to pray and share with one another their experience of contemplative living.  Recently they have been reading Judy Cannato’s  Radical Amazement available from Notre Dame, Sorin Books, 2006. 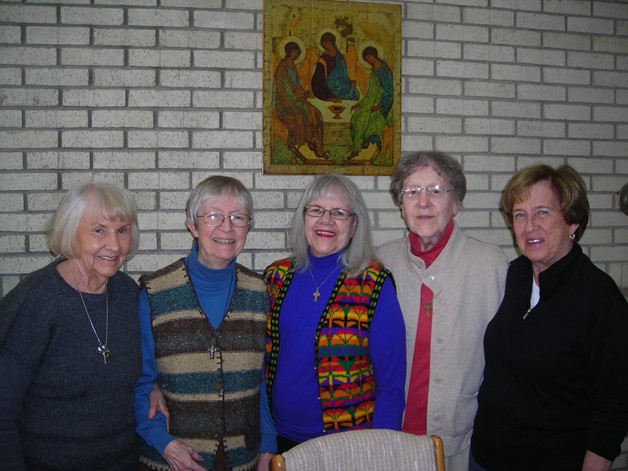 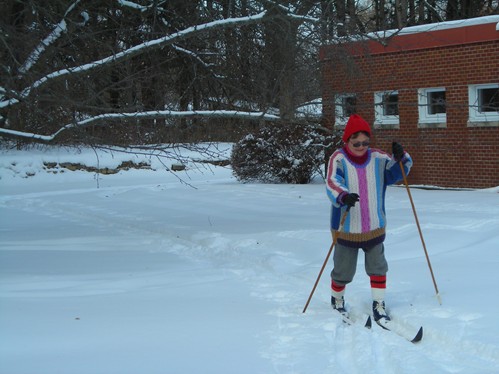 comes the colorful Sr. Catherine, bedecked in her handmade sweater and cap, undaunted by Minnesota cold. 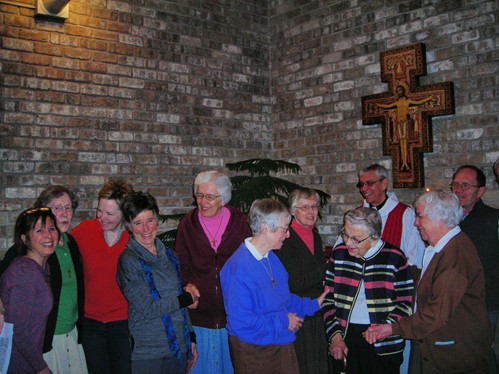 Our chapel is anything but cold and colorless as the Sisters pass the peace with daily worshipers. 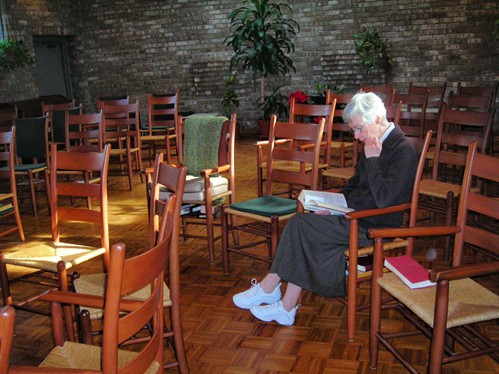 In a chapel scape of empty chairs Sr. Kate is content in her winter reading.

Thanksgiving is a theme for every day but how wonderful for our whole country to take one special day for all of us to celebrate together!  Paulina and Monica are talented cooks.  They also contribute their artistic talents in the Chapel. 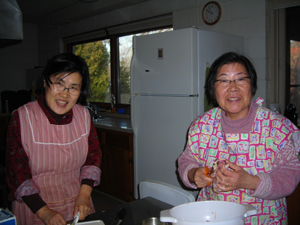 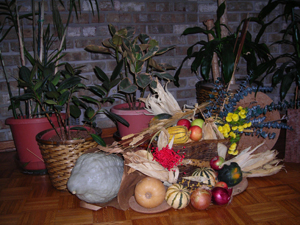 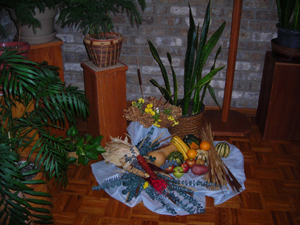