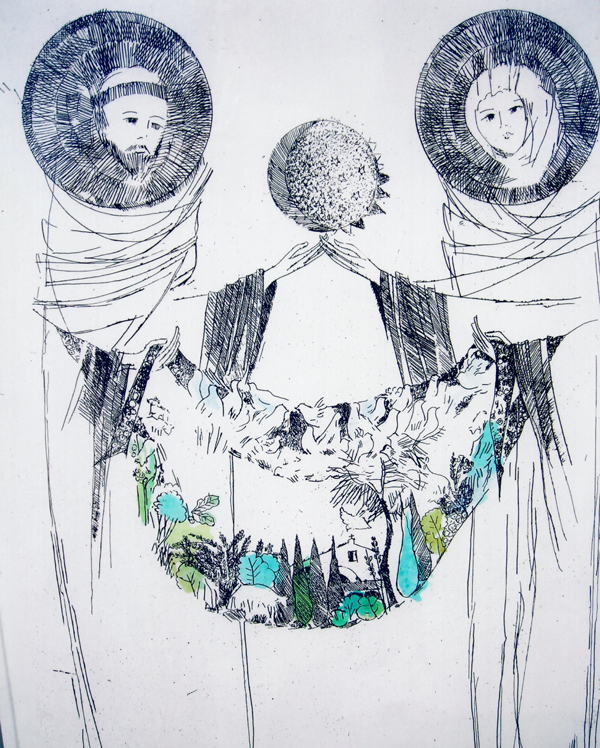 Marisa Picelli is the author of this drawing of Clare and Francis with the animals and birds at the church of San Damiano.   I think of  Clare and Francis as a type of Adam and Eve, and the animals and birds as representing all of creation.  In the center is a symbol of the Trinity: the Sun giving light to the Moon, and the Stars radiating throughout the universe.   This beautiful image was brought to us from the Gallery of the Song of San Damiano in Assisi.

Clare and Francis of Assisi and the lesser brothers and poor sisters can never be separated from God’s holy people.  As we look back in time to 13th century Assisi, we see a creative energy and lightsomeness moving among God’s people.  This was not just in Italy but west to the British Isles and to the east, to the countries of the Levant.

Eight hundred years later there was another moment of light and energy.

Both the Franciscans of the 13th century and Christians at the time of the Vatican  Council looked to the first Christian era and the Scriptures containing the stories of Jesus of Nazareth and the activities of the first Christians.  When reading the Christian Scriptures they realized that what Jesus read and prayed in Synagogue were the Hebrew Scriptures.  The prayer of the Our Father was in the Aramaic.

My point here is that globalization and ecology are not simply a study of matter, but also include the spiritual history of our planet and truly of the cosmos.  We need to look at moments of spiritual enthusiasm that contribute to the passionate research of the spiritual dimension of humanity and all created matter, matter and spirit together.  Teihard de Charden is a modern example of a person who lived and taught this double endeavor. We need both scientfic research and living expressions of spiritual traditions.

In what sense then can Clare of Assisi contribute to Ecology?  “Eco,” oikos comes from the Greek meaning “house.”  And of course, logy is the “study of.”  House is a meaning- laden term.  Open a good dictionary and you will find how broad and inclusive is the concept of  “a house.”

In October, 2009, working with Dr. Jean Moleski-Poz and Friar William Short, OFM in preparation for the first Clarian retreat at the Franciscan Center, San Juan Bautista, CA, the theme that emerged immediately without any hesitation on the part of the four of us so engaged in the retreat preparation was: “The House of Clare.”

In 1212 Frances and the brothers welcomed Clare and her sisters to San Damiano.  The charism of the Franciscan family was born.  In 1224 at San Damiano, suffering from a disease of the eyes, Francis composed the “Canticle of the Creatures: Praise to you, Brother Sun…Sister Moon and all the creatures…”  Francis, who never had blood sisters, learned what it was to have a sister from Clare.  We all need one another.  We are all inter connected, both materially and spiritually.  Is that not we learn from ecology?

Those of you who know the early writings and traditions of the Franciscans are aware of the focus of the early brothers and sisters on poverty.  Strange?  Maybe not.  According to the tradition Clare fought for the “privilege” of living in community without dowries, and income generating property.  The Clares were not independently weathy.  The key word is “independent.”  They needed the friars and God’s people. Their world was deliciously interdependent. 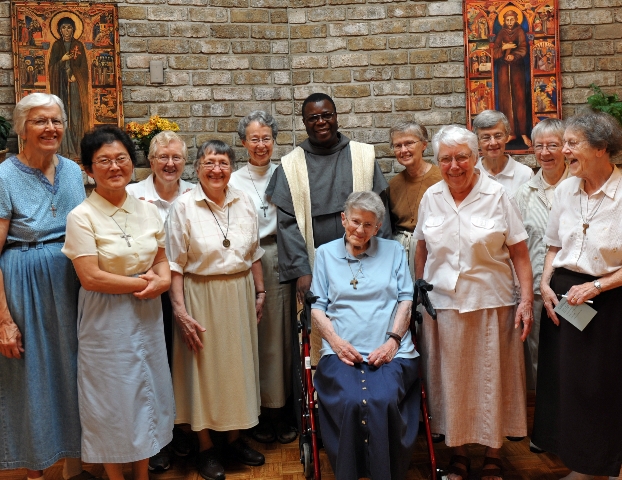 Father Patrick Chisanga, OFM, Conv. visits us from Zambia.  He is the newly elected minister of the Zambian Province of the African Martyrs.